Weather in the Village of Paddock Lake 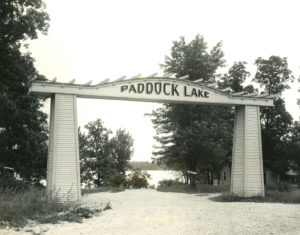 In 1838 three generations of the Paddock Family left New York and headed west by covered wagon. The family settled between two lakes known now as Paddock and Hooker Lakes. The eldest Paddock, David fought in the Revolutionary War and died shortly after the trip.

1843 – Dr. Francis Paddock acquired 281 acres of land from the U.S. Land Patent Office. Dr. Paddock was the first medical professional in the area. He became well known and respected for his expertise in treating fevers and also for his large herd of cattle. That year the first school was built in this area. The building still stands as a house next to Brass Ball Fruit Stand.

1855 – The Town of Brooklyn was renamed to the Town of Salem upon the arrival of Mr. Cogswell.

1883 – Old Settlers Club moves its 44 year old club to the south side of Paddock Lake.

1928 – The Illges Family developed vacation and Lake Colony on the South west side of Paddock Lake.

1929 – Channel dredged on the southwest corner of the Lake. This created Evergreen Isle where a 37 lot subdivision was planned.

1930’s – Brass Ball Road House, on the southwest side of Hwy 50 and 83, is a popular attraction by travelers to and from Lake Geneva.

1960 – The hamlet known as Paddock Lake in Salem Township is approved to detach from Salem and incorporate The Village of Paddock Lake is created.